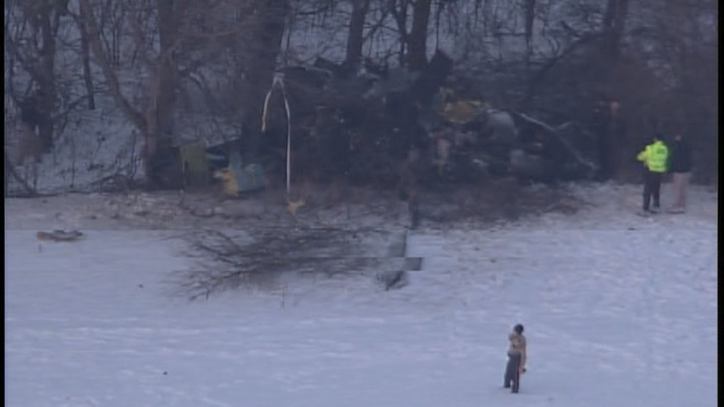 Minnesota National Guard Master Sgt. Blair Heusdens said the helicopter went missing after a mayday call nine minutes after taking off at 1:55 p.m Thursday from the St. Cloud airport. The National Guard lost contact with the aircraft officially at 2:05 p.m.

The UH-60 Black Hawk was conducting a maintenance test flight from the St. Cloud airport.

Emergency crews were seen from Sky FOX 9 responding to a wooded area on a farm near Kimball, Minn. Thursday afternoon.

"Our first priority is the safety and well-being of our Guardsmen and our thoughts are with our soldiers and their families at this time," said Heusdens.

Governor Tim Walz has been in contact with the Minnesota National Guard since the incident. Gov. Walz will be heading to the St. Cloud area to address the media at 7:30 p.m. He postponed the state's annual tree lighting ceremony scheduled for Thursday evening after the news broke.

The helicopter went down about one-quarter mile away from the Krippner family's home near Pearl Lake. The family runs an excavating business and has a gravel pit on their property.

"Fire department was out in the yard, stopped out here to see if we’d seen anything and we decide we would go out and help look," said Kurt Krippner. "We went down in the pit never seen anything – it was just on the outside edge of the pit."

As the investigation continues, the Krippner family says authorities told them they will not be able to work in their gravel pit until further notice.

"It’s a sad ordeal, no one want this to happen, accidents happen, it’s bad deal - just hope for the best," said Krippner.

The Minnesota Aviation Rescue Team and the Minnesota State Patrol responded to the report of the downed aircraft. Firefighters from St. Paul Fire Department were also deployed in support of the MART team.

Sad day for everyone.
Flight crew, families, friends, and the pilots and maintainers in the MNARNG.
Huge loss. I can only imagine what they are going through right now.

Incredibly sad considering the time of year as well. This is our division’s first drill since getting back from Kuwait. Thankfully everyone will be together to support each other.

The 28-year-old recently left a job as a corrections officer with the Stearns County Sheriff’s Office to pursue his dream of becoming a pilot, according to a tweet from the agency ...