So, I'm on reserve in JFK and I went up to the airport to get some food, and I also wanted to get some photographs of the historical TWA Flight Center as I am an amateur photographer.

I wasn't even sure how close I could get to the building, because anyone who uses JetBlue's T5 knows that you basically wrap around the old building on your way in.

So I go out through the parking garage on the ground level and walk straight up a sidewalk, taking photos along the way (Which I will post later). There was still an entire 3 lane road between me and the huge sidewalk in front of the building, when this Rent_A_Cop comes Roaring out the front door waving his arms and yelling at me. At first I thought he was saying that I couldn't come any closer and that I wasn't allowed inside. To be honest, before this happened I had planned on walking all the way up to the front door. For those who don't know, the building is owned by the Port Authority and is a registered Historical Landmark.

THen I realize this guy is yelling "You can't take any photos of this building!"

Huh? Scuze me pahtnah? I'm not allowed to take photos of a vacant historical landmark?Go fudge yourself.
So I start firing away and this guy is losing his •, waving his arms, screaming and yelling. SO I turn around and walk away with him yelling for me to get back over there so he can confiscate my camera. Ya buddy, that's happening.
My thist for photos of this iconic piece of airline history not yet quenched, I walked around to the other end of the parking lot and started taking more snaps. Dude comes blasting out again. I'd seen where he was sitting... he had a chair right inside the main door, just chilling (If that were my job I would have been over every inch of that building and have a bedroom full of vintage TWA signage!!!!
I didn't want to push the issue any more so I went on about my next goal of Cheeseburger Cheeseburger. Only when I got around the the departures side of the new T5 did I realize that you are literally a stones throw away from the backside of the Saarinen Building, where the passenger tubes connect. I asked a guard if I could take pictures of the backside and he looked at me like I had just yelled "TIMMY!" Had I known that the back side of the building is where the lighted TWA sign was, I would have done ALL of my shooting there so that I could get them while the light was still good.

SO I wonder what that security guard major malfunction was.
I did a quick Google search, and all I could find was that photography is not allowed on the Port Authority's PATH, whatever that is, it ain't the FLight Center. I was on the non-secure side of a facility, taking photos of an abandoned building with no direct connection to any secure/SIDA area. I asked a TSA guard inside about it and he said "Sheet I'da asked for the idiot's name and badge number!

Nice photos. That is such a beautiful, iconic building. TWA was there for several decades. Wasn't the Port Authority going to revamp the entire building/area and put a hotel and restaurant or something attached to it? They had done some sort of renovations to it a number of years ago and then I have no idea what happened.
T

Gorgeous building and great pics. Thanks for posting.

TWA was my first choice in my early Frequent Flyer days and I kept using them until AA bought TWA.

Been in and out of that JFK terminal many times.

You whipper snappers won't even know what the below papers are for. Those papers are things that they charge you extra money for these days should you want one sent to your house before the flight.

They were in negotiations with a company to develop a hotel around the building much like T5 is. Since it is now a landmark they cannot change the inside or the outside, as they both have landmark status. Negotiations fell through earlier this year though. I guess now they are talking to another company.
Personally I think that they ought to make it into a museum or an art gallery or something. What I would do to get inside of it. There is an UrbanUnderground website that was allowed access into the depths of the building.. interesting stuff.

Staff member
Ahh, when visionary architects designed buildings and not some MBA.

Neat pics to bring up some good memories.

Derg said:
Ahh, when visionary architects designed buildings and not some MBA.
Click to expand...

Honestly, I thought Terminal 3 would have gotten the same treatment as the Saarinen building. I wonder how the "emperor of Georgia" pulled off completely demolishing it.

Staff member
Speaking of that, Visalia's terminal has more charm than most anything built in the last 20 years.

WestIndian425 said:
Honestly, I thought Terminal 3 would have gotten the same treatment as the Saarinen building. I wonder how the "emperor of Georgia" pulled off completely demolishing it.
Click to expand...

By doing it quick.

I really wished at least the saucer would have been salvaged.

love the photos. brings back memories.

Derg said:
By doing it quick.

I really wished at least the saucer would have been salvaged.
Click to expand...

Agree... There were preservation sociaety protests for Teriinal 3 but in the end they didn't get it put on the historical charter, and that is the key to saving it. Shame because like Dough said, I thought at least the saucer portion would stay... the rest is add-on from the years.

Great post. Thanks! Brings back memories of a bygone era.

Excuse my ignorance but I've never flown into JFK. When was the terminal last used? Did it have jet bridges? It just doesn't look like an airport at all in those pics.
A

L-16B said:
Excuse my ignorance but I've never flown into JFK. When was the terminal last used? Did it have jet bridges? It just doesn't look like an airport at all in those pics.
Click to expand... 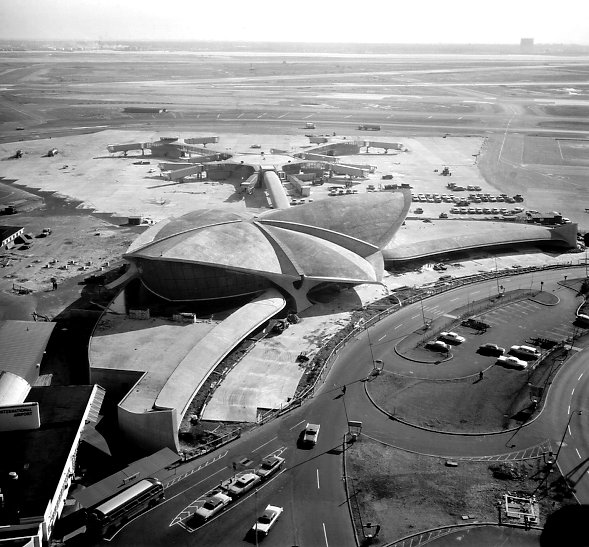 So in 30 years will the next generation feel the same sense of loss about the way things used to be?

And these are the same "rent-a-cops" that are demanding a raise.

The Saarinen building is not in a SIDA area, so there can't really be any restrictions. Sounds like you just got a power-happy mall cop.

Rogo said:
And these are the same "rent-a-cops" that are demanding a raise.

The Saarinen building is not in a SIDA area, so there can't really be any restrictions. Sounds like you just got a power-happy mall cop.
Click to expand...